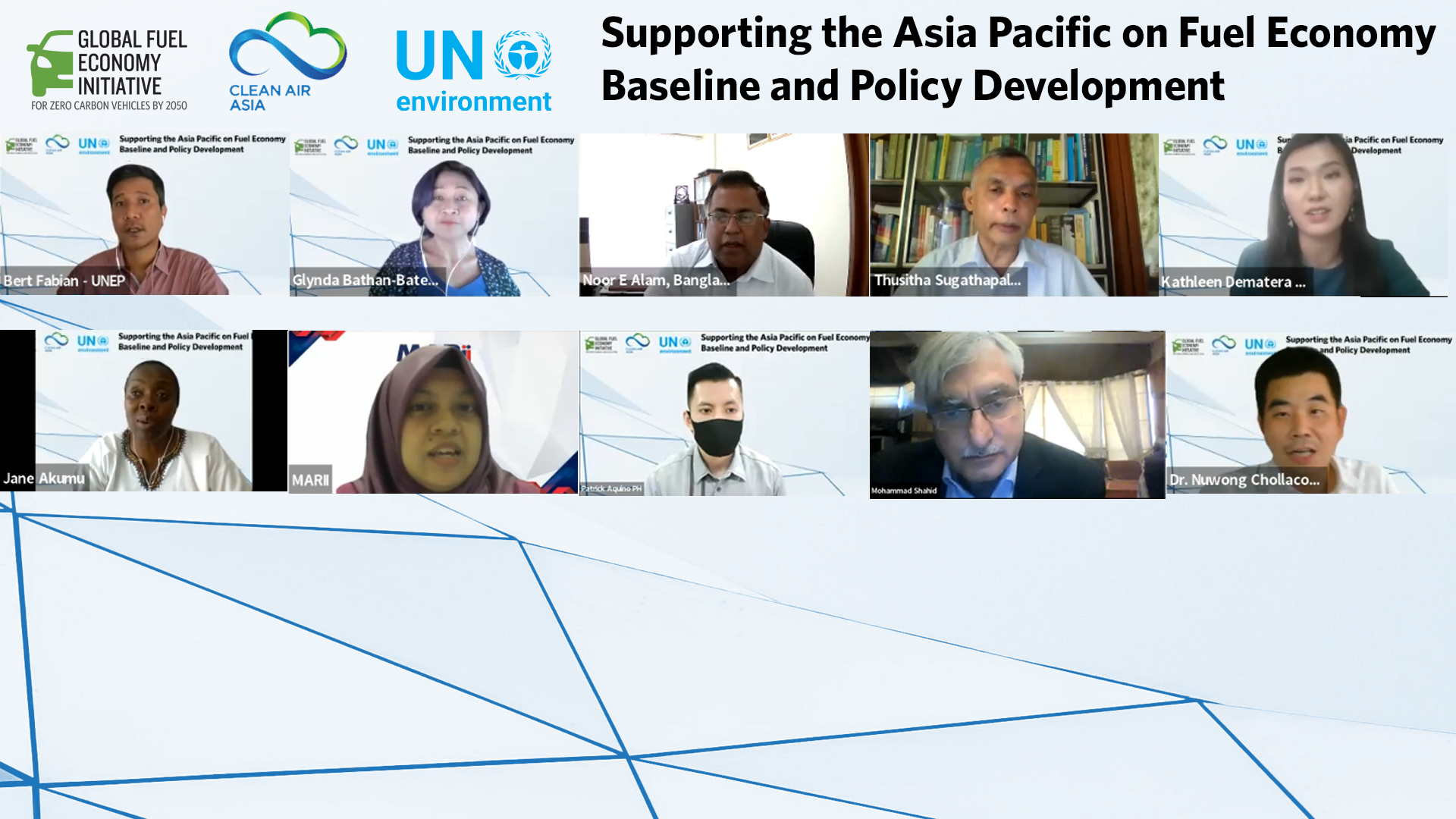 The importance of improving fuel economy as part of the region's united goal to win the climate battle was underscored by think tanks and experts across Asia Pacific as part of an important global project to reduce emissions from vehicles.

The comments came during a webinar on Fuel Economy Baseline and Policy Development held in late March, co-organized by Clean Air Asia and the UN Environment Programme and formed as part of the Global Fuel Economy Initiative (GFEI).

The event aimed to accelerate the development of ambitious fuel economy measures through a knowledge exchange on successful policies and initiatives, improved fuel economy and vehicle efficiency reducing emissions, and how using less fuel saves more money. These policies can also be important stepping stones in transitioning to zero emission vehicles and electric mobility.

During the first half of the session, the instrumental role of light-duty vehicles (LDVs) in the fuel economy baseline development was highlighted. The number of these continues to grow, particularly in developing markets.

“The fuel economy baseline and policy developments focus on looking at the new LDV registrations for certain years. It is imperative that we know what kind of vehicles are coming to our countries so that we can make sure that the future new vehicles that will come after 2-3 years will be more efficient,” said Bert Fabian, UNEP Programme Officer.

Sheila Watson, Director of the FIA Foundation, expressed the same objective as she stressed partnerships between the countries to promote a more efficient and cleaner vehicle fleet.

“As GFEI we are supporting the maximum possible efficiency of the vehicles on our roads across the globe, be they heavy or light duty vehicles,2- or 3-wheelers, or buses. This is an essential under-pinning in achieving the Paris goals set for 2050,” she said.

The discussion highlighted the difficulty of acquiring the necessary vehicle information for fuel economy analysis as a common challenge experienced by countries around the world.

For example, Noor E-Alam from Bangladesh shared that the analysis required field surveys to get information on vehicle model and engine displacement, since these were not available in their database.

In the Philippines, Kathleen Dematera Contreras from Clean Air Asia cited how the country relied on secondary data in their fuel economy baseline development. Dr. Thusitha Sugathapala from Sri Lanka also expressed their data concerns - particularly on imported vehicles and those whose manufacturers use different testing facilities.

Dr. Nuwong Chollacoop from Thailand shared that the imposition of excise taxes in 2016 led to the improvement of their fuel economy by 2.5% of gasoline-fueled vehicles.

The same policy was proven effective in Kenya, where excise duties for imported vehicles up to three years old led to a significant improvement in fuel economy in 2014. Feebates -- the policy that shifts consumer purchases to lower emission vehicles by placing a “fee” on more polluting vehicles and by granting efficient vehicles “rebates” -- were also accepted by the public through an intensified awareness program, as shared by Jane Akumu from the UNEP.

The feebate scheme in Mauritius, which is based on the CO2 threshold, prompted the increase in energy-efficient vehicles and resulted in the government granting more rebates than collecting levies. This paved an opportunity for its government to adjust their feebate scheme and further monitor the impacts of its policies on the overall vehicle fleet.

For Pakistan, Mohammad Shahid highlighted the development of fuel economy baseline, and its resulting policies focus on improving vehicle fleet through vehicle retirement and fiscal incentives for electric vehicles.

In the Philippines, Director Patrick Aquino said the policies on fuel economy rating and labeling are being developed and stressed that the Energy Efficiency and Conservation Act (Republic Act No. 11285) already serves as the basis for accelerating the development of such policies for the road transport vehicles in the country.

Lastly, Nur Farhana Helme discussed Malaysia’s ambitious goal of further reducing fuel economy by 5.3 L/km by 2025 through an extensive collection and monitoring of data on fuel consumption and emissions, application of new technology elements, and development of the country to be the hub for Next Generation Vehicles.

The webinar concluded that there is a need for the proactive participation of the government institutions in pushing through the development of fuel economy and its corresponding policies. Further, public support must also be sustained through increased awareness campaigns and stakeholder consultations.

The event was supported by the Global Fuel Economy Initiative (GFEI), the FIA Foundation, the Global Environment Facility, and the European Commission.