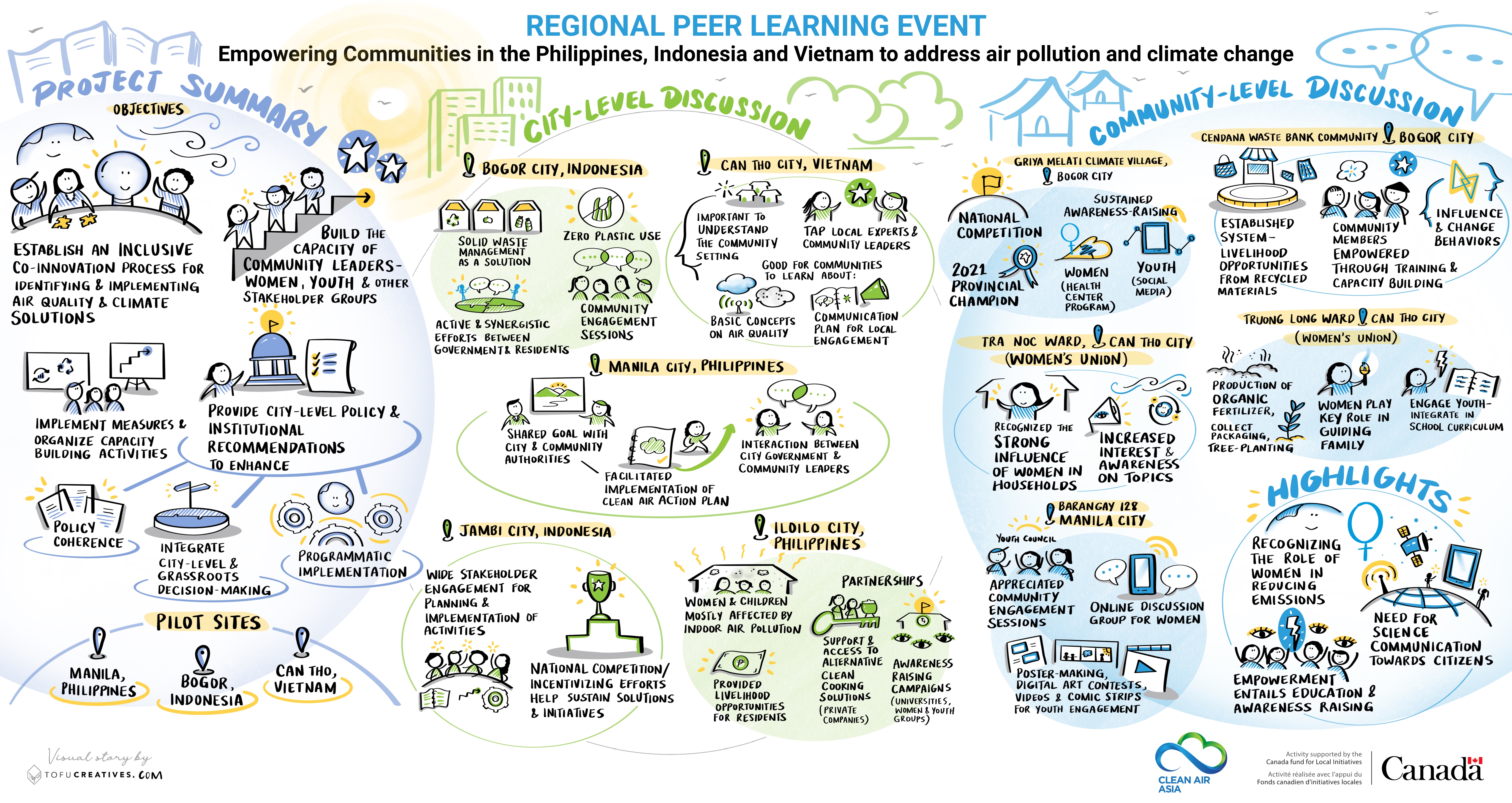 In early March, representatives from member countries of the Association of Southeast Asian Nations (ASEAN) convened to share their experiences of engaging grassroots communities in air quality and climate action, and how they can help contribute to change.

The Regional Peer Learning rounds off Clean Air Asia’s project entitled, “Empowering communities in the Philippines, Indonesia, and Vietnam to address air pollution and climate change” -- funded by the Canada Fund for Local Initiatives -- which underscores the need to  involve stakeholders down to the community level in implementing clean air action plans and interventions.

“We believe that this is just the beginning, not only with the pilot cities and communities of the project, but also for communities and cities across the region to communicate and collaborate for an inclusive approach for the people to address the pressing issues of air pollution and climate change,” said Dang Espita-Casanova, Program Manager at Clean Air Asia.

The project piloted in three ASEAN cities: Bogor (Indonesia), Can Tho (Vietnam), and Manila City (Philippines) wherein various community engagement sessions were facilitated from September 2021 to February 2022. Requesting to add a paragraph on projects goals and outcomes

Mr. Syahril Ramdhani, Community Leader of Griya Melati Climate Village in Bogor, Indonesia, shared that a national competition is one of the motivating factors in their community’s active participation in community-level climate change adaptation. This resulted in Griya Melati being proclaimed as the provincial champion in 2021.

Another community leader in Bogor, Ms. Neni Satria Astana of the Cendana Waste Bank Community, explained how they established a system wherein recycled materials from waste were produced into crafts. Their community learned that their members, especially women, are empowered enough to sustain these gains through training and capacity building activities.

In Vietnam, Ms. Truong Thi Le Thao, Chairperson of the Women Union in Tra Noc Ward, Can Tho City, recognized that women showed strong influence in their respective households, and to engage them is a good strategy in addressing local issues within the community.

Ms. Nguyen Thi Kim Ngoc, Chairperson of the Women’s Union in Truong Long Ward if Can Tho City also added how women in their communities were heavily involved in environmental protection activities such as production of organic fertilizers, collection of packaging wastes, and tree-planting.

For her part, Ms. Alma Geli, Chairperson of the Sangguniang Kabataan at Barangay 128 in Tondo, Manila stressed the importance of good communications amongst women and mothers in ramping up the dissemination of information materials on climate change adaptation and air quality.

Dr. Adri, Head of the Environmental Agency in Jambi City, Indonesia, also shared the incentivization of efforts and conducting national competitions to promote awareness and encourage community participation on their environmental activities.

Meanwhile, Ms. Duong Thanh Van, Senior Officer of Can Tho Environment Protection Agency in Vietnam, underscored the importance of understanding the community setting and its stakeholders in the implementation of community-level solutions and action.

For his part, Manila City representative Mr. Allen Adalin from Department of Public Works and Highways spoke about how the community sessions served as a bridge between the city government and their communities to discuss together their action plans for better air quality.

“Air pollution and climate change know no borders/boundaries and addressing them requires a collaborative effort by everyone. This means that community engagement is key to addressing local air quality and climate issues effectively,” said Mr. Brian Shipley, Counsellor from Mission of Canada to ASEAN.

In addition to the three pilot cities, included in the ASEAN countries present in the discussion were representatives from Brunei, Cambodia, Laos, Malaysia, Myanmar, Singapore, and Thailand.

In conclusion, the participants in the regional sharing session affirmed that women hold important decision-making and leadership roles in their households and within their respective communities, which should be continued to be leveraged in efforts towards reducing emissions.